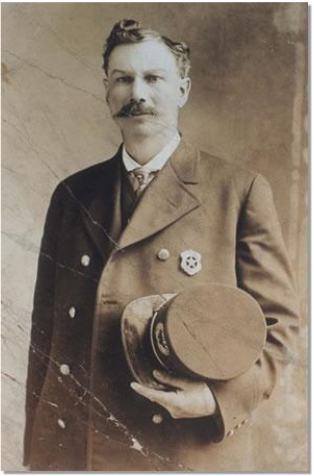 Frank Dustman became the first Chief of Police for the City of Port Angeles in June of 1915.1 Prior to that time he was a U.S. Marshal assigned to the Port Angeles area. Dustman held the post for roughly six months, before J.E. Sullivan’s appointment in January 1916. Following Sullivan’s appointment, Dustman continued to serve as a police officer with the department.2

As was more common in those days, Sullivan became Chief of Police when a new city council and mayor took office. His appointment was unanimous.2 J.E. Sullivan was reported to have experience in police work in another state prior to becoming Chief of Police at the Port Angeles Police Department.2

Garfield Davis was a marshal or constable in Port Angeles from 1910 through 1914, before becoming Chief of Police with the Port Angeles Police Department in 1917. He also served as a deputy sheriff at one point. He was the chief of police until December 1918.3

Loring Dwelly was appointed Chief of Police in January 1919, by then mayor J.L. Pegram.4 His appointment was confirmed by the council of the day.4 He remained in the position until December 1920.5

Vanwert Welch became Chief of Police in January of 1921.6 He had formerly been a sheriff’s deputy.7 Welch remained in the position of chief until December 1924.6 After retiring from the position, he became a game warden in Clallam County and was instrumental in the importation of mountain goats to the area.7

Thomas Milton “Milt” Bourm became Chief of Police in January 1925.8 At the time of his appointment, Bourm had only an assistant chief and two patrolmen as members of the Police Department.9 Bourm had previous law enforcement experience in Wyoming as both a sheriff and an undersheriff.9 Bourm was responsible for introducing uniforms to the Police Department.11 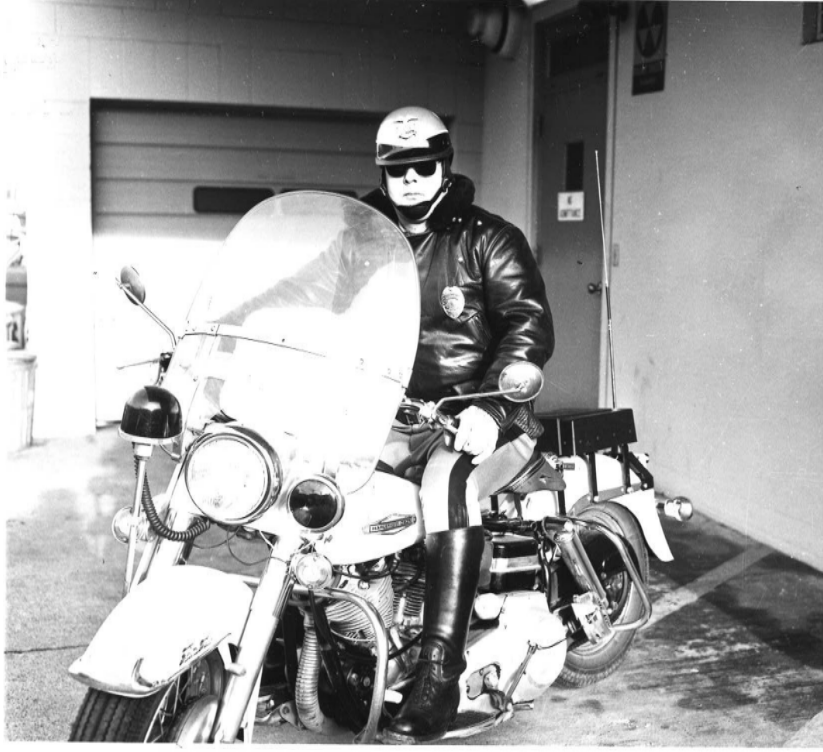 On February 23, 1925, Bourm acquired a uniform in order to, “give dignity to the law and serve as identification for strangers who might be looking for a policeman”.10 The uniform he wore that day in 1925 was, “of blue serge, with brass buttons,” but did not have a hat or helmet of any sort.10 He also created a motorcycle patrol.11 Bourm was chief of police until November 1930.8

Ruben Ide was an officer with the Port Angeles Police Department before becoming the Chief of Police.13 He was, “advanced to the rank of chief,” on April 6, 1938.15 Ide was promoted from captain to chief after taking an oral examination on police work, conducted by the city civil service board.15

Ide was the first Chief of Police in Port Angeles to take a civil service examination, which had been mandated by state law several years earlier.16 It was due to Ide that the police department moved from insufficient quarters on West 1st Street to a new and more modern (for the time) location at Front and Oak Streets.16 Ide retired as chief of police in March 1954.17 When Ide first began working with the police department there were only six men on the force.16 At the time of his retirement the force had grown to fifteen.16 Ide worked at the Port Angeles Police Department for a total of 25 years, 16 of them as chief of police.16

Harry Kochanek was chief of police for 23 years, from June 14, 1954 until March 1, 1978.18 Prior to his employment with the Port Angeles Police Department, he had served for five years with the Coast Guard.18 Kochanek joined the Port Angeles Police Department on October 7, 1947.19 He worked as a patrolman for three years, and with local schools for the next seven years after that.18

Then he was advanced to the position of Chief of Police after a “competitive examination” with other applicants.18 Kochanek advised that a chief of police needs compassion, “If you had somebody with a little feeling for people you’d have a good chief,” he stated in an interview.18

Michael Cleland became chief of police in 1978, and remained chief until he retired in March of 1992. He helped to establish Peninsula Communications (PenCom), the communications center which now handles emergency service calls for 17 police and fire agencies in Clallam County.20 He also brought D.A.R.E. (Drug Abuse Resistance Education) to the area and was instrumental in the development of the region’s first drug task force (which became today's OPNET.20) Cleland also, “upgraded equipment, hired more officers, improved facilities, increased officer training and created better relations between the department and other agencies, as well as the public.”21 Before serving with the Port Angeles Police Department, he worked in Thurston County, first as a volunteer firefighter and later as a deputy with the Thurston County Sheriff’s Office.20 Upon retirement, he advised that it was important to, “keep your eyes on the needs of the community.”21 He further stated that, “we can’t ever lose track of who we serve, and that’s the people.”21

Stephen Ilk was chief of police from 1992 through May 31st, 2000.22 Before working for the Port Angeles Police Department, Ilk was an aircrew member aboard a Navy P-3 and a refinery auditor.22 Ilk worked for a total of 28 years with the department, starting, “as a reserve and went on to serve as a patrol officer, detective, sergeant, lieutenant, and captain.”22 He was the second detective appointed in the Department23 and, as Chief, saw to the initiation of the Department K9 Program.24 Ilk also saw the importance of the community and law enforcement communicating and “noted the department’s efforts to connect the community with law enforcers – an advisory committee, senior volunteers, school and drug officers.”22 It was Chief Ilk who introduced the first computers to the department.26 He also increased the educational standard required of entry-level police officers, moving from a high school diploma standard to two years of college.26 Finally, the take home patrol car program was Chief Ilk’s creation, and can be credited with saving the Department many thousands of dollars.26 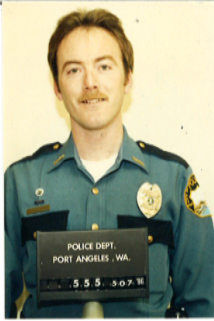 Terry Gallagher served as the department’s deputy chief during Riepe’s time as chief.26 He was appointed to the chief’s position following Riepe’s departure.26 Gallagher was also a Port Angeles native.26 In fact, he and Tom Riepe were in the same class throughout their elementary and high school years.26 Gallagher was a US Army veteran, serving from 1977-1980.26 He came to work for PAPD in January of 1985.26 In 1987 he became the first D.A.R.E. officer in Clallam County and introduced that program to the community and various schools in the area.26 Prior to assuming the chief’s position, Gallagher served as a patrol officer, D.A.R.E. officer, narcotics detective, patrol sergeant, detective sergeant and deputy police chief.26

His time as chief is noteworthy for the significant advances in technology that occurred under his leadership.26 The first computers were installed in police vehicles while Gallagher was chief and all officers were issued mobile phones.26 More significant, from Gallagher’s perspective, was that the department navigated the recession that began in 2007 and continued throughout his tenure as chief without any employee losing their job.26 Overtime costs were reduced by more than $100,000 a year under Gallagher, and a program to rebuild or restore police vehicles was initiated, effectively saving the department many thousands of dollars.26

Chief Gallagher’s family had some prior relationship to law enforcement.26 His grandfather, James R. Gallagher, had served as the sheriff of Clallam County from 1914 to 1916.26 He was later employed as a Port Angeles police officer, retiring from the department while holding the rank of captain in about 1952.26 Chief Gallagher’s older brother, Steven P. Gallagher, was a Port Angeles police officer from August 1976 to April 1983, before moving on to the Olympia Police Department where he retired in January 2006.26 Finally, Gallagher’s uncle (James Gallagher’s son) Gilbert, was a Whitman County deputy that was shot and killed in the line of duty in April of 1949.26

Port Angeles Chief of Police Brian Smith has over 36 years of diverse law enforcement experience. He has worked for the Port Angeles Police Department for over 8 years and the National Park Service for over 27 years. Chief Smith has a Master’s degree in Public Administration from Montana State University and also graduated from the FBI National Academy in the 214th Session in 2003. He has and undergraduate degree in Political Science from the University of California at Berkeley. He was appointed interim Chief in March of 2016 and appointed as Chief in July 2016.

Since coming to Port Angeles in 2008, Chief Smith has been instrumental in the promotion and implementation of several programs that have helped the Port Angeles Police Department progressively move forward in the world of policing. He played a major role in obtaining Stonegarden grants for implementing the mobile data project between local law enforcement agencies as well as increasing foot patrol in the downtown area. Smith collaborated with City staff and others to promote the wireless mesh network and use grant money to obtain computers and technology in all patrol vehicles. In addition, he applied and received a FEMA grant that allowed a state of the art security system along the waterfront to be installed. Smith has established interlocal agreements with law enforcement agencies such as the Lower Elwha Klallam Tribe, U.S. Border Patrol and the U.S. Coast Guard. He has been the driving force behind cross commissioning officers with other local, state and federal law enforcement agencies.

Chief Smith oversaw the Washington Association of Sheriffs and Police Chiefs (WASPC) Accreditation process over the last five years, and with the assistance of others in the department, has met the accreditation standards making Port Angeles Police Department one of sixty law enforcement agencies in Washington State that is accredited. The Port Angeles Police Department is currently developing an outreach program directed at the homeless population and at those with opiate addiction. This involves formal partnerships with social workers from behavioral and mental health, public health, corrections and the health care providers. Since early 2015 the Port Angeles Police Department has been affiliated with PAARI (the Police Assisted Addiction Recovery Initiative) and is actively working toward funding that will allow the Department to establish a police social worker position. An outgrowth of this effort was the “housing beat” foot patrol program. A PAPD officer and a social worker work a foot patrol assignment as a team and make contact with persons on the street in an effort to get them into social services (e.g. housing, treatment or medical services). The Department will add Fire Dept. EMS personnel and mental health outreach to this “housing beat” program in 2017.